Sensory information Integration and processing by the brain are altered in several neurological and psychiatric disorders, especially in schizophrenia.
This integration of sensory information can be monitored using EEG in the auditory cortex. Several experimental protocols are commonly used in the clinic on human patients.
That includes the use of Auditory Event-Related Potential (AERP) protocols, which consists in stimulating the auditory cortex with one single short noise (a click) then recording the resulting cortical response, characterized by typical positive and negative deflections, well described in the clinical litterature.

Another type of auditory stimulation protocol is the Auditory Steady-State Response (ASSR).
ASSRs consist in cortical electrophysiological oscillations entrained to the frequency and phase of a periodic auditory stimulus presented at a rhythm in the gamma range (that is, 30-80Hz).
ASSR protocol consists in stimulating the auditory cortex by a train of clicks (usually for 0.5 to 2 s) with a fixed inter-click interval (Brenner et al., 2009). After an initial response lasting ~250 ms, the train rapidly entrains the cortical activity to the stimulation frequency and phase of the stimulus. 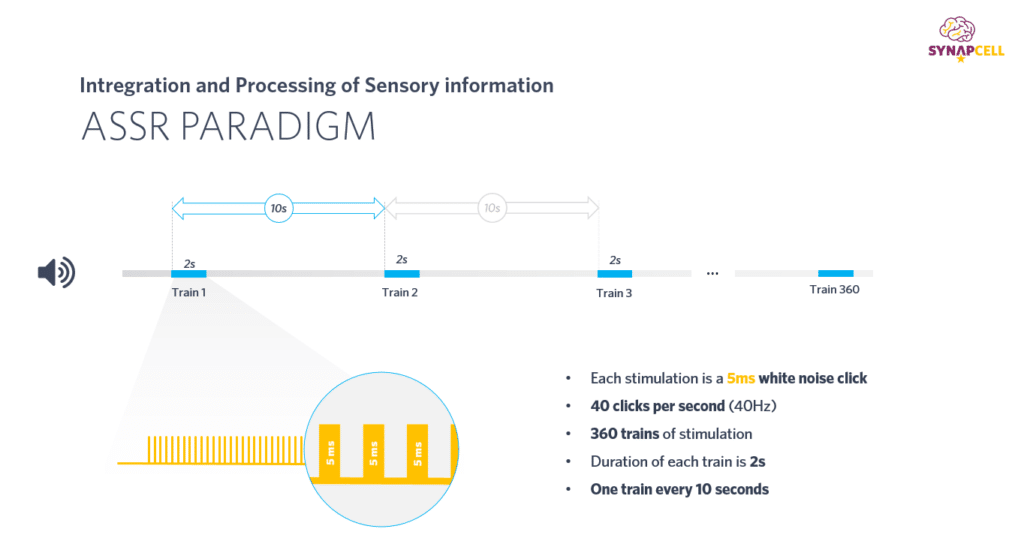 ASSRs are believed to reflect the interplay between cortical pyramidal neurons and parvalbuminergic interneurons. Consistent with the theory of imbalance between cortical excitation and inhibition in schizophrenia, patients show reduced power and phase locking, to stimulations presented at 40Hz. 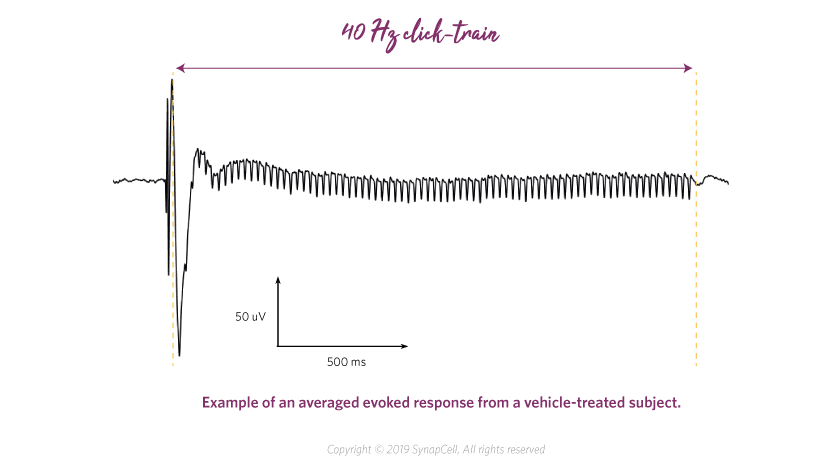 From the steady-state oscillation evoked by the ASSR stimulus, an entrainment power can be extracted, usually measured at the stimulation frequency (± 5 Hz) where the entrainment peaks. Two different calculations can be applied. The total power measures the total EEG power comprised in the frequency band. The evoked power measures the power of the activity that is phase-locked with the stimulation. Another calculation compares the inter-trial coherence (ITC), and was developed more recently to evaluate the phase-locking of the signal (Delorme and Makeig, 2004). 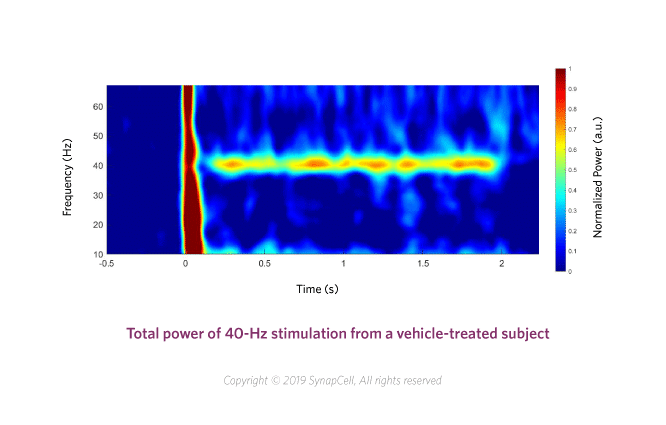 Testing with EEG the ability of the auditory cortex to follow a continuous stimulation provides a noninvasive method to determine the characteristic of its response to stimulus.
In particular, modulations of the ASSR has been studied in schizophrenia, in which auditory hallucinations and delusions is a diagnostic criterion. ASSR responses at 40 Hz have been shown to be reduced in power and phase-locking in schizophrenic patients (Kwon et al., 1999; O’Donnel et al., 2013; Sun et al., 2018).

Additionally, multiple neurotransmitter receptors and other molecules are known to impact auditory information processing, allowing these measurements to be used as target engagement biomarkers, i.e. to assess whether experimental compounds are interacting with their target molecule.

At SynapCell, we have developed an ASSR protocol in rodents with a paradigm that reproduces the clinical protocol. We record the EEG response to a train of clicks in the parietal auditory cortex and in the frontal associative cortex. Recording at these two brain levels allows evaluating the processing of auditory information at two different stages, which enables to evaluate the effect of drug candidates in a translational biomarker equivalent to a clinical protocol.

Previous articleHPD - Term of the Month

Next article BetaPark - Term of the Month