Mesio-temporal lobe epilepsy (MTLE) represents one of the most common forms of focal epilepsies. Generally resistant to most pharmacological treatments, this type of epilepsy affects about 10% of the total epileptic population. SynapCell has an extensive expertise modeling the disease with its MTLE mouse, a translational model that mirrors human MTLE. The MTLE mouse is a non-convulsive model of focal, pharmacoresistant epilepsies. Its #EEG reveals spontaneous and recurrent Hippocampal Paroxysmal Discharges (HPD), which are used as objective EEG biomarkers to reliably evaluate the effect of anti-epileptic drugs (AED) in vivo.

Mesio-Temporal Lobe Epilepsy represents a major challenge in the clinical management of seizures. This form of epilepsy is often associated with severe cognitive and emotional impairments, and affects about 10% of the total epileptic population. In addition, MTLE becomes generally resistant to most pharmacological treatments (Engel et al., 1997).

SynapCell has developed an animal model of MTLE in which, unlike most other models, dispersion of the dentate gyrus is observed (Bouilleret et al., 1999 and Riban et al., 2002). In this model, unilateral injection of a small dose of kainate (1 nmole) in the dorsal hippocampus of mice results in neuronal losses in CA1, CA3 areas and hilus as well as mossy fiber sprouting, in addition to an important dispersion and increase of granule cells of the dentate gyrus (Suzuki et al., 1995 and Mitsuya et al., 2009). 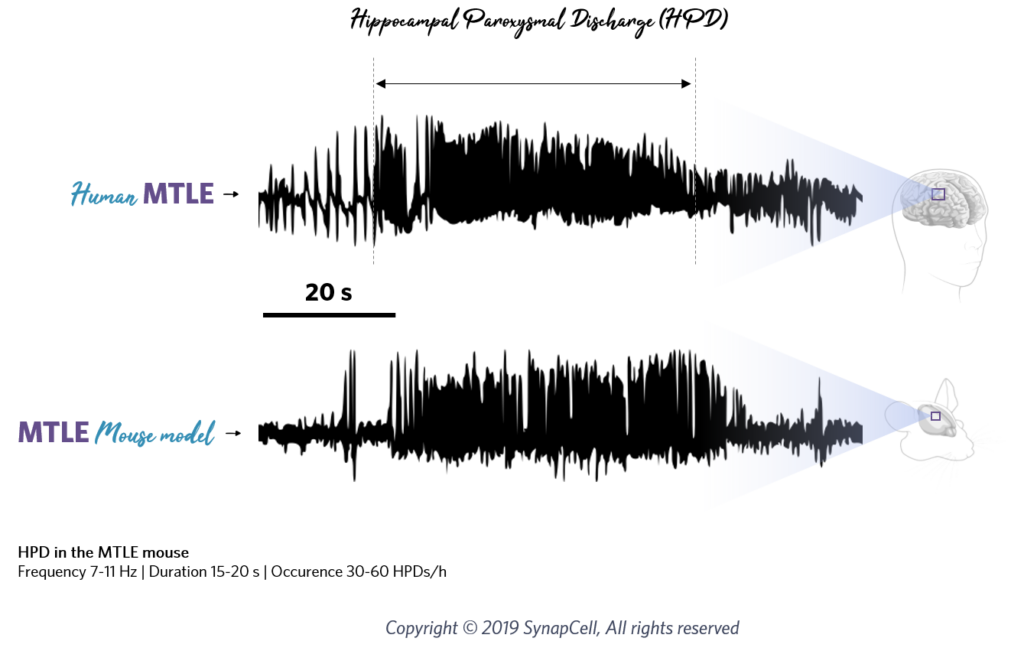 These focal seizures remain stable during the rest of the animal life and occur regularly (about 40/h) when the animals are in a state of quiet wakefulness (Riban et al., 2002 and Arabadzisz et al., 2005). During the first two weeks following kainate injection, before the occurrence of HPD, interictal spikes progressively occur by bursts of increasing duration 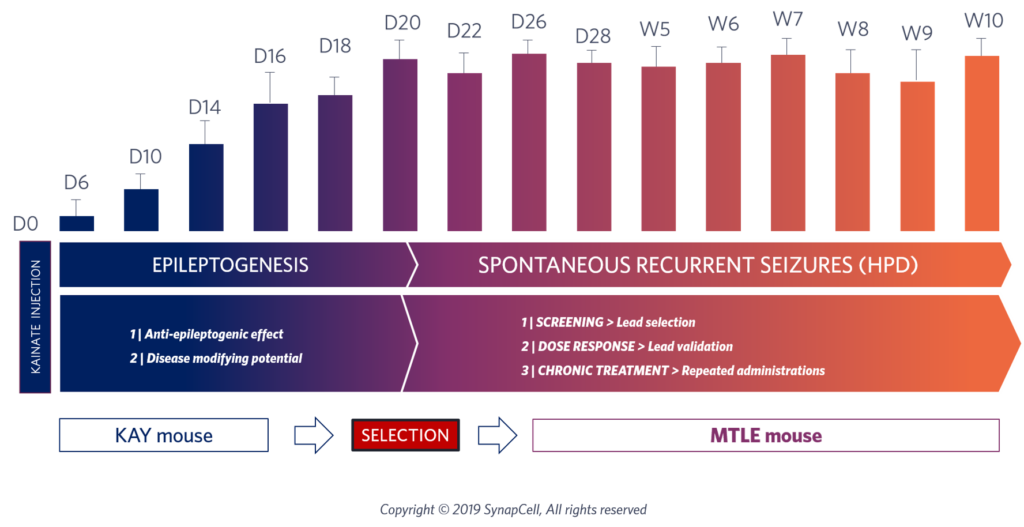 More importantly, this model is resistant to most classical antiepileptic drugs: valproate, carbamazepine and lamotrigine can suppress the hippocampal discharges upon acute treatment only at high doses and with side effects (Riban et al., 2002; Duveau et al., 2016). We have shown that HPD are dose-dependently suppressed by acute administration of diazepam. However, recently developed AEDs, such as pregabalin, levetiracetam or vigabatrin were shown to be active on this model with no side effects (Duveau et al., 2016).

Altogether the histological, electrophysiological, behavioral and pharmacological features, in addition to a species-appropriate latent period following the initial insult, validate this model of pharmaco-resistant MTLE. Indeed, it fulfils most criteria recently proposed for an efficient preclinical development of antiepileptic and prophylactic therapeutic strategies for MTLE (White, 2003).

Previous articleSWD – Term of the month

Next article ASSR - Term of the Month

Synapcell and Reservoir Neuroscience announce collaboration for development of treatment for chronic epilepsy12/14/2021
AES 2021: Partnership with OVID Threapeutics in Epilepsy12/03/2021
CNS Therapeutics Xchange 202111/16/2021
We use cookies to ensure that you get the best experience on this website. By continuing to use this website, you indicate that you have read our Terms of Service.OkLegals